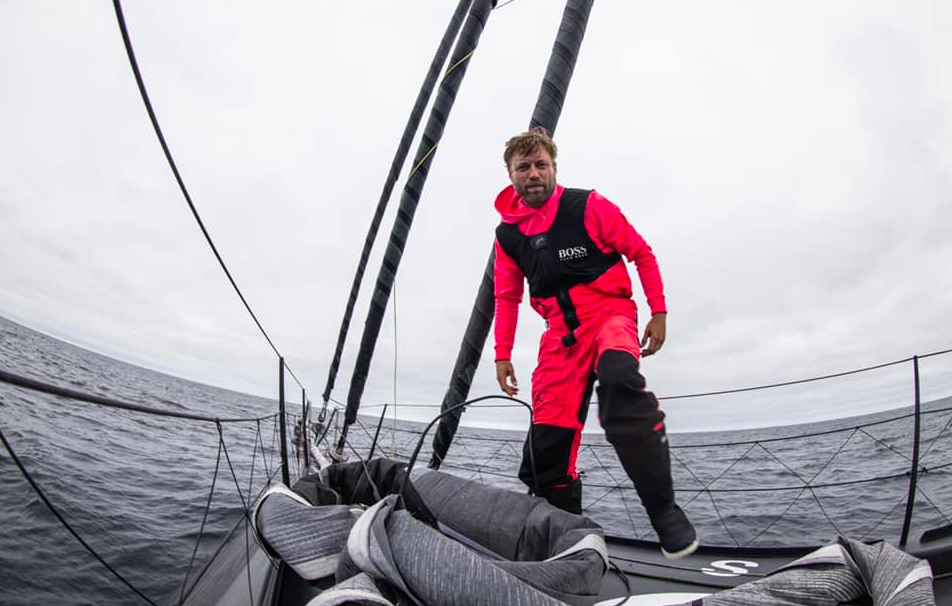 Alex Thomson (Hugo Boss Vendée Globe competitor) has heralded his hometown of Gosport as ‘blessed’. He says the maritime town has all the suppliers he needs, according to Marine Industry News.

“They know what we need – the details – it’s important,” Thomson says. “We need to keep that Gosport skill, and to keep campaigns running out of there.” It’s where Thomson has spent his Vendée Globe lockdown, prior to the race, although he’s now back in Sables d’Olonne where the team’s still crunching data.

“We’re running through data learning stuff from the last 20,000 miles,” Thomson says. “We’ve run the routes for the last 40 years – with weather.” He’s calculated that the minimum time the current Hugo Boss could circumnavigate in any of those years is a sparkling 59 days, while the longest is 90 days. But, as Thomson says: “It’s a big spread and hard to predict.”

When they’re not engaged in the maths, Thomson says his team are ‘beating’ him into shape.

“We made a deal to allow me to have a beer after training but I’m being disciplined all the time. I’ve stopped myself from eating pork pies and done a lot of sailing this year. I’m feeling in good shape. I’m five kilos lighter, about my last Vendée Globe finishing weight. But I have more food on board this time. My aim is not to lose any weight. We’ve worked hard on food to get me stuff I want to eat and get motivated to eat.

“It’s been a long journey, disrupted by Covid, but we’ve stuck to the plan and achieved everything we wanted to achieve. It feels good.

“People ask me what it’s like [to compete]. After the last one I said ‘I live in a cave’.”

That’s still the same for this race, as Thomson admits he doesn’t feel safe going forward when travelling at 40 knots. But, the big difference this time is that he can see the trim of the sails from portholes in his cockpit, which he is delighted about. Check out the video below which gives a rundown of the complex systems inside the cockpit – with 3km of rope and 46 lines.

As well as prepping for his own race, Thomson has been offering guidance to Ari Huusela, Ocean Racing. Huusela says Thomson has pushed home the need to create value for the sponsors.

“The main call is sponsors are happy and will continue with us. So, we must make our sport well known and interesting for sponsors,” says Huusela.