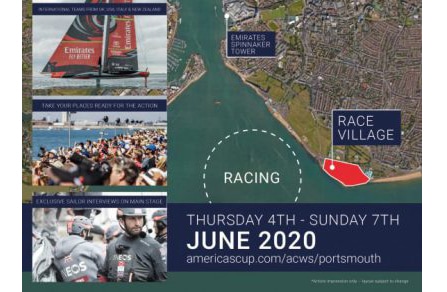 World-class America’s Cup sailors will return to the Solent for the second event in in the Emirates America’s Cup World Series preliminary regatta from 4 to 7 June 2020 as part of the competition to win the oldest sporting trophy in the world.

Councillor Steve Pitt, Cabinet Member for Portsmouth Culture and City Development, says: “We’re delighted that Portsmouth will be part of the prestigious Emirates America’s Cup World Series yacht racing again in June next year. America’s Cup events attract a world-wide audience and we’re looking forward to the city’s waterfront being centre stage for this esteemed international sailing event. The event is also significant for raising the profile of Portsmouth and its marine and maritime businesses across the globe.”

Having raced at the two previous ACWS events in Portsmouth, Emirates Team New Zealand CEO Grant Dalton says: “Portsmouth was a fanatically supportive city for the ACWS in 2015 and 2016, so we are looking forward to getting back there. The difference this time is the racing will be in the new AC75’s which will be a spectacle like nothing seen before on the Solent.”

Sir Ben Ainslie, Team Principal and Skipper, INEOS TEAM UK comments: “We are really looking forward to competing in front of our home crowd again. The 2015 and 2016 America’s Cup World Series events in Portsmouth saw an estimated 250,000 fans line the Southsea waterfront. It’s so great that Portsmouth has been chosen as only one of two locations outside of New Zealand where people can watch the AC75 foiling monohulls in action. We are confident the racing will deliver a true spectacle.”