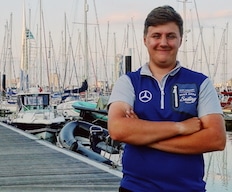 One of the first Gosport Marine Scene Ambassadors, Sam Frost, is showing what is possible for young people interested in maritime careers.

With experience working with Alex Thomson Racing, including on the most recent Vendée Globe, and Clipper Ventures, the 18-year-old is proof that if you know where to look for opportunities, and have the confidence to go for it, they are there. And in ambassador roles for Gosport Marine Scene and British Marine he is helping shine a light on what is possible for young people interested in maritime careers.

Sam’s passion for sailing was sparked at Lee-on-Solent SC’s OnBoard Gybe club. Despite growing up down the road, and seeing the Gybe boats on the water every Saturday, like so many youngsters Sam didn’t click sailing was something he could do. That changed, aged 13, when his dad’s friends clubbed together to buy a Wayfarer and Sam went out for the first time. He joined Gybe almost immediately. In four years in Gybe he became an integral part of the club. First to arrive, last to leave and leading by example in taking responsibility for any jobs that needed doing. As soon as he got his RYA Level 4 he became an Assistant Instructor to support Gybe activities and is now working towards his Dinghy Instructor qualification.

Seeing an advert for the 2013-14 Clipper Round The World Race on the Underground inspired him to contact Clipper Ventures, based on his doorstep in Gosport, to find out what work experience opportunities might be available. He was in luck and two weeks working with their maintenance team on the Clipper 68s followed.

Sam’s work ethic and attitude were getting him noticed, and when Gosport Marine Scene wanted Ambassadors to promote sailing to young people, Sam was recruited.

As a volunteer Sailing Ambassador Sam goes into youth clubs, sailing clubs and schools to raise awareness of the accessibility of sailing and provide realistic, tangible ways of getting into it. The message that you don’t even need to own your own boat is key. Now, as one of the first Gosport Marine Scene Sailing Ambassadors, he is helping to train and mentor the third intake to follow in his footsteps.

It was also through this role the chance to work with Alex Thomson Racing arose. To start with just an enthusiastic pairs of hands was needed to help clean the shed after Hugo Boss, Alex’s boat, left to compete in the 2014-15 Barcelona World Race.

Since then Sam has been invited back to help several times, gaining experience in many areas, including rigging, putting the foils in and out and removing the keel. He also provided office support during the 2016-17 Vendée Globe, including taking calls from Alex, and helped tie the boat up on its arrival back in Gosport.

Sam studied Boat Building at Southampton City College and is now doing a diploma in Engineering at Highbury College in Portsmouth. He has also taken on a volunteer role with British Marine, going round marine workplaces to find out what experiences they could offer young people passionate about the industry. In addition, he helps to educate college and school careers advisers about what opportunities and apprenticeships do exist in the marine industry and how they can support youngsters interested in sailing in pursuing such careers.