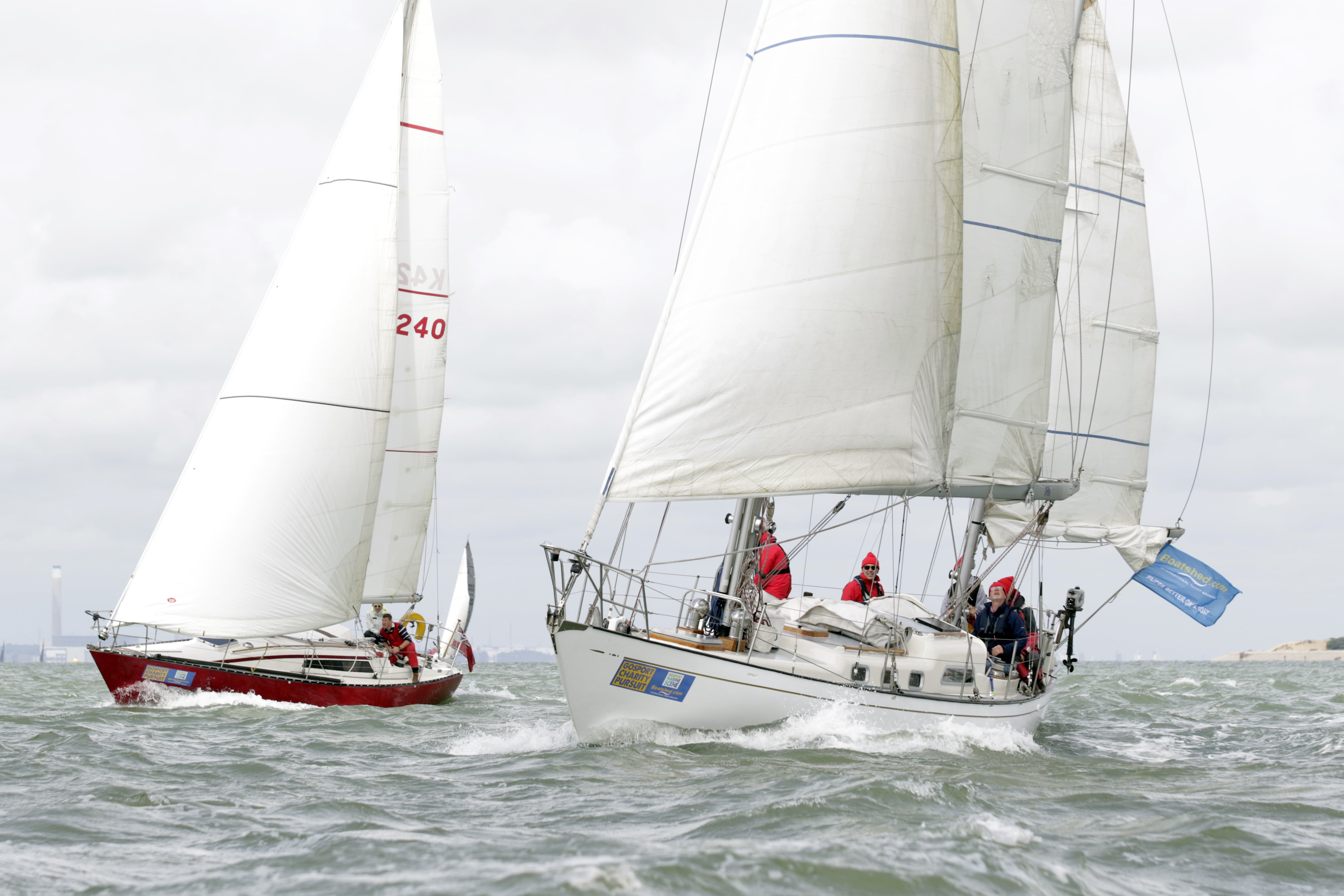 After a superb day on the water in the Eastern Solent,  and with a fresh south westerly breeze, the 17 competing yachts in the Gosport Charity Pursuit 2018 raised the very impressive sum of £8500 for their chosen charities, with over £2000 going towards Gosport Marine Futures.

The sailing was both challenging and exhilarating for many of the yachts’ crews who were not necessarily seasoned sailors.  The staggered start times over the start line off GAFIRS had the smallest yachts starting at 10 o’clock and the fasted an hour and a half later.  The system proved extremely successful as RABBIT, an Evolution 22, and skippered by Ben Archer, was first to cross the finish line just 14 seconds ahead of ASSASSIN, a Prima 38, skippered by Jon Wetton and Mark Brown and the second highest rated yacht on handicap.  With one or two exceptions, the whole fleet had crossed the finish line within 20 minutes of each other.

The fleet was shadowed out to Nab Tower and back for the most part by the historic high speed launch HSL 102 from Portsmouth Naval Base Property Trust and the VIPs on board had a grandstand view of the Pursuit.

The prize giving and after-Pursuit party, generously hosted by Hornet Services Sailing Club, was preceded by the famous ‘Fizz at Five’ laid on by the main sponsor of the event Boatshed.com, where copious amounts of champagne were liberally dispensed.

The overall winner of the event, with the highest accumulated points, and retaining the Gosport Challenge Cup for the second year, was JUKE BOX, skippered by Chris Copeland.  In addition to coming 3rd on the water, they also raised over £1300 for the Sherborne branch of the RNLI.  Caroline Dineage, MP for Gosport, presented the cup together with an additional prize of a lift out, scrub-off and re-launch at Endeavour Quay, sponsored by Premier Marinas and presented by Tim Newell.

There were lots of other categories for prizes and trophies.  First on the water was ASSASSIN, who received their trophy, which was sponsored by Resolute Property, from Caroline Dineage;  CHUSANNA, skippered by Andrew Tomkins, raised the highest total of over £2500 for The Greyhound Trust and received their trophy from Abby Thomson who, as part of Sisters Inn Arms, sponsored the ‘Highest Fundraiser’ category.  Other sponsors were YouBoat, RS Divers, ASTO and Steve Jupp.

Skippers and crews are already eager to sign up for next year’s Gosport Charity Pursuit!