Gosport Marine Festival 2017 gets hundreds of kids on the water 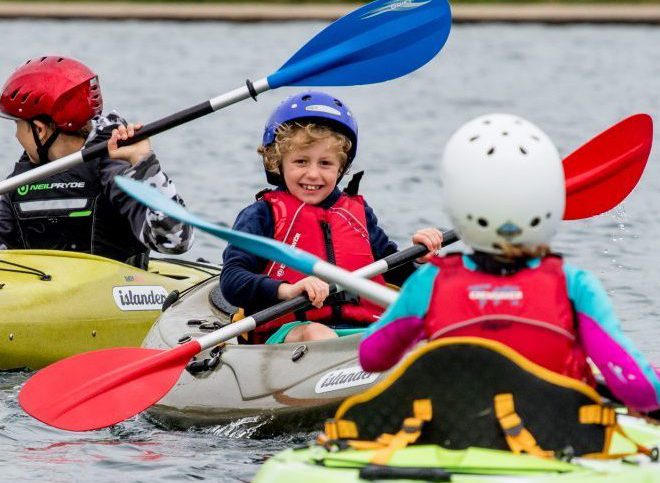 Hundreds of young people have had the opportunity to get on the water and many more visitors explored the on shore activities at the second Gosport Marine Festival, which took place on Saturday 27th May 2017.

The festival, which was opened by Gosport’s record breaking yachtsman, Alex Thomson, showcased the watersports on offer in Gosport with 500 free Crewsaver GoWaterSport on-the-water sessions available. Activities on offer included dinghy sailing, stand-up-paddleboarding, kayaking and sailing trips. All activities were generously provided by local organisations and sailing charities including Gosport Sea Cadets, Andy Biggs Watersports, Stokes Bay and Lee on Solent Sailing Clubs, St Mary’s Junior Sailing Club, Gosport Model Yacht Club, Discovery Sailing Project, Gwennili Trust, Little Brigs, Tall Ships Youth Trust, Wetwheels Solent and OnBoard Charters. As well as the on-the-water activities, visitors were able to get aboard a number of historic and performance vessels moored in Haslar Marina for the festival, including Medusa, one of the first vessels to arrive at the Normandy beaches ahead of the D- Day landings, Steam Pinnace 199, Motor Gun Boat 81, and Boleh.

The day began with a parade down Gosport’s High Street by Gosport Sea Cadets and the Rose & Thistle Pipes & Drums band and throughout the day visitors could enjoy entertainment from local acts, hosted by Radio Haslar. In Holy Trinity Church there was a nautical themed art and craft fair, as well as craft activities with a water safety message for younger children at Little Shipmates.

Cllr John Beavis, who chairs the organising committee for Gosport Marine Festival on behalf of Gosport Marine Scene which has staged the event, said, “It’s been great to be able to showcase everything that Gosport has to offer, not just our brilliant watersports but our lively sailing clubs and associations, local marine businesses and talented entertainers too. We’re delighted that so many people have been able to experience Gosport at its best.”

Gosport sailing superstar, Alex Thomson, who opened the Festival said “It’s a privilege to be able to open the Gosport Marine Festival. Getting kids out on the water is a great way to inspire them to get involved in water sports, Gosport is very well placed to take advantage of everything the water has to offer, and who knows where the kids out on water for the first time today might take the sport from here!”

Visiting the festival, the Mulhall family said “As a sailing family it was great to be reminded of the many opportunities to have fun on the water in our town . We’re very lucky to live by the sea and have had a thoroughly enjoyable day due to vast array of activities at the festival.” Also visiting, the Pearce family from Portchester, commented “We’ve enjoyed the bands and going on the boats, and making boats in Little Shipmates.”