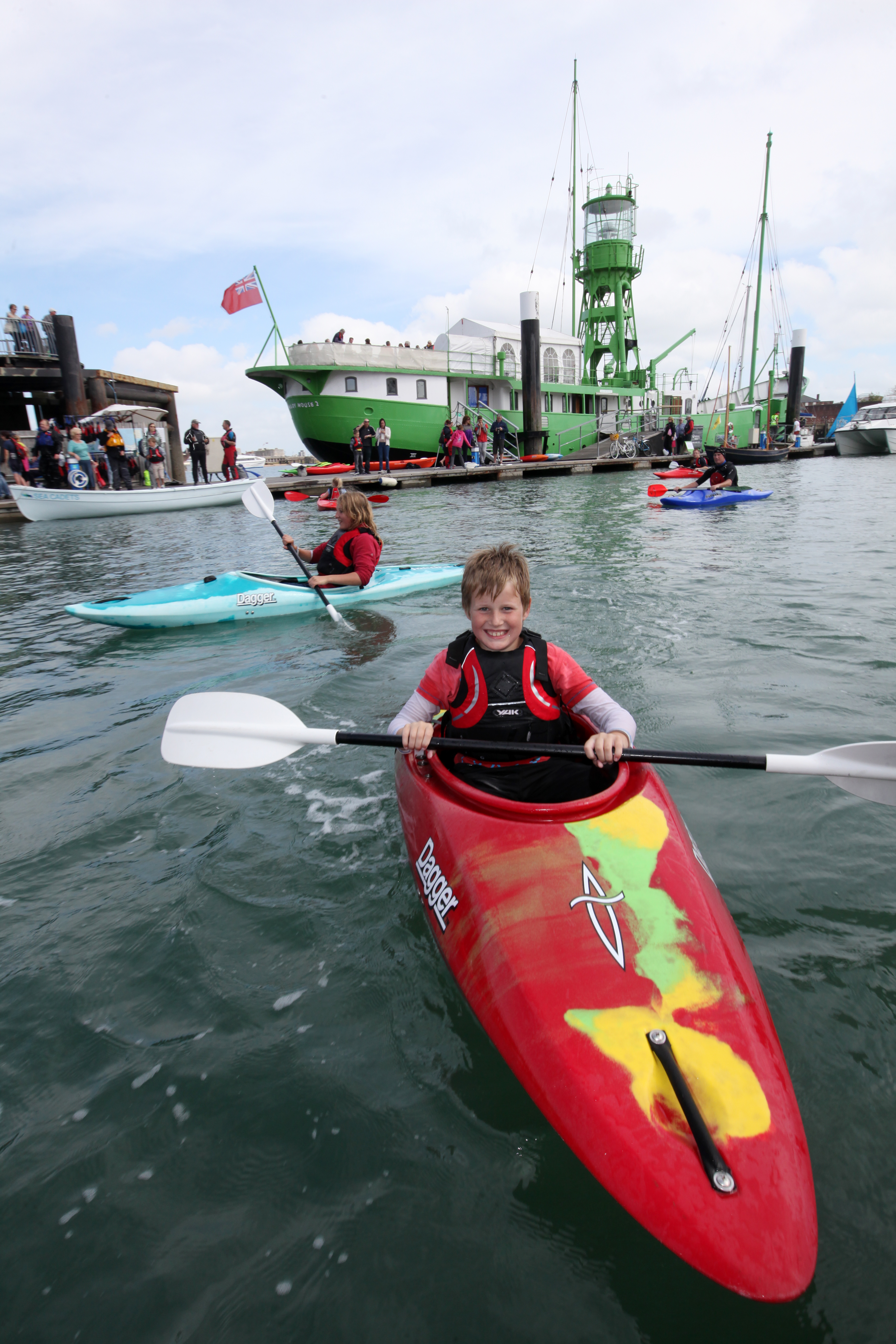 Hundreds of young people have taken the opportunity to try the many water sports on offer on the Gosport peninsula as thousands of visitors enjoyed the first ever Gosport Marine Festival.

A thousand free places were on offer to showcase the wealth of water-based activities available with boats, safety equipment and instructors provided by local organisations and sailing charities including Gosport Sea Cadets and Lee on Solent Sailing Club. As well as the Crewsaver GoWaterSport activities, in the Float Show historic and performance vessels were open to the public. They included Medusa, one of the first vessels to arrive at the Normandy beaches ahead of the D-Day landings; Gosport-built Gypsy Moth IV, the yacht in which Sir Francis Chichester became the first man to sail solo around the world; and GREAT Britain, one of the Gosportbased 70-foot ocean racing yachts getting ready to take part in the Clipper Race later this year.

On shore hundreds of spectators relaxed in the June sunshine to enjoy Radio Haslar’s entertainment programme which featured local singers, dancers and performers while under-6s who were too young to try the water sports had fun in the Little Ship Mates Play & Create zone in Holy Trinity Church where there was also a nautical art and craft fair. Cllr John Beavis chairs the organising committee for Gosport Marine Festival on behalf of Gosport Marine Scene which has staged the event. He said, “It’s just brilliant to see so many people enjoying themselves here today, not just on the water but in Timespace taking in the entertainment as well. “The Gosport peninsula has so much to offer and I’ve spoken to lots of people who have never been on a boat before but have tried out sailing or kayaking today. The look on the children’s faces when they come back in is worth every bit of effort our team of volunteers has put in to bring this together.” One of the volunteers, Dawn Bishop, said, “The atmosphere is so lovely, everyone is having a wonderful time.” Ben Lippiett manager of Haslar Marina said, “Two things in particular stand out from today: It’s been fabulous seeing so many kids getting the opportunity to get out on the water that may not otherwise have been able to do so. I’ve also been speaking to lots of folk who’ve lived here for years who have never been into any of the marinas so it’s been wonderful to be able to say we’re part of the town, these boats are part of the heritage of Gosport and to be able to open the gates and welcome them down.

We couldn’t be more thrilled with how it’s gone today.” Lucy Gross from ASTO, the Association of Sail Training Organisations, which is based in Gosport, said, “I’m delighted that several sail training organisations have been able to provide free taster sails including Ocean Youth Trust South, Discovery Sailing Project and Rona Sailing Project. We’ve also had one of Little Brigs ships here. All of these local organisations provide challenge and adventure for young people so we’d encourage any youth groups to get in touch to find out what opportunities are on offer.” The Festival was opened by Gosport’s record breaking yachtsman, Alex Thomson and at the closing ceremony three Young Sailing Ambassadors will be announced to spread the word among their peers about the fun to be had on the water. Sam Frost from Lee on Solent Sailing Club, Rosie Hill from Stokes Bay Sailing Club and Harry Salmon from Gosport Sea Cadets are part of the legacy project Gosport Marine Scene will develop from this inaugural Gosport Marine Festival.

The next GMF will be on the 27 May 2017, at Haslar Marina and TimeSpace on Trinity Green.