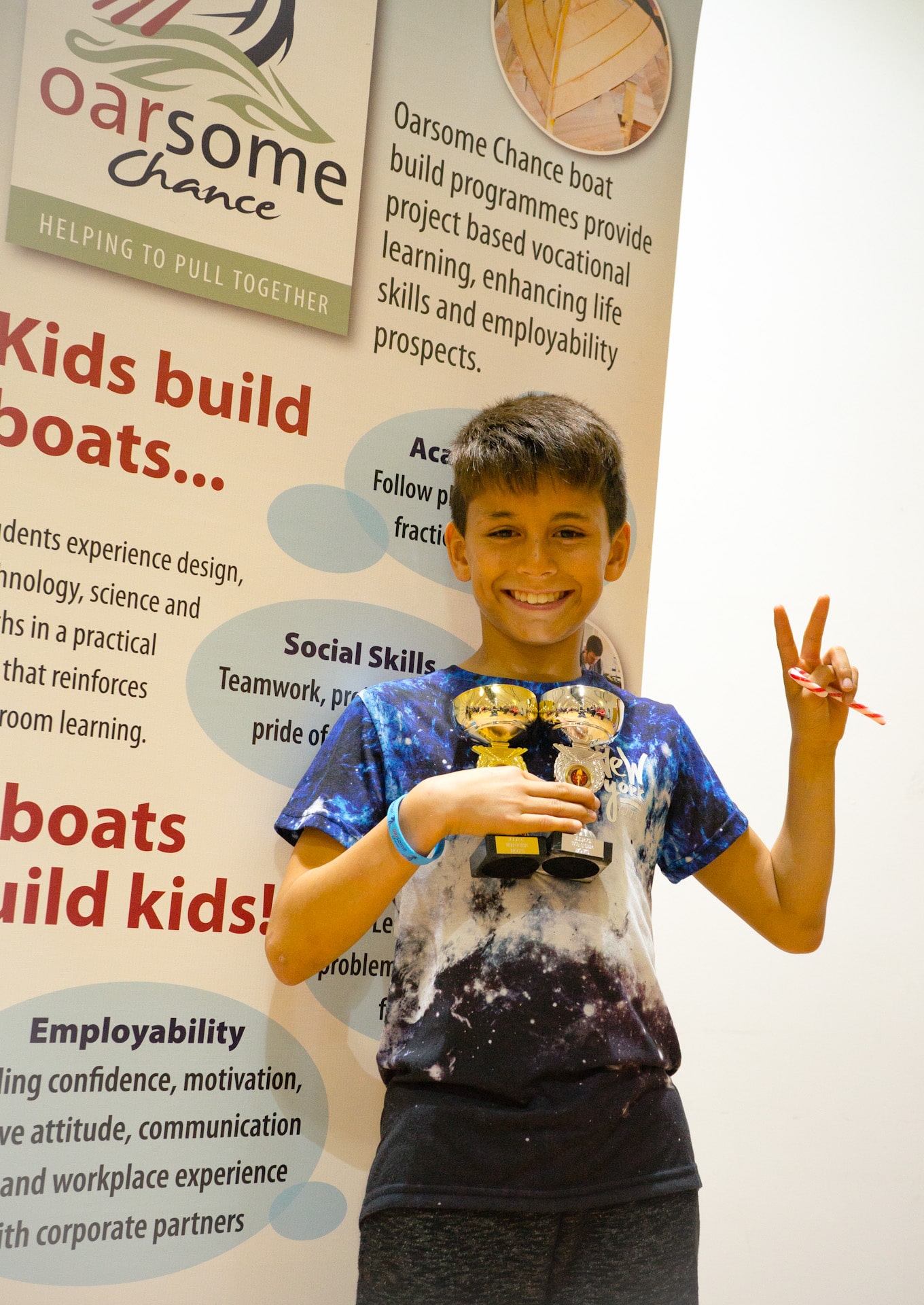 Brockhurst Primary School, St John’s C of E Primary School and Haselworth Primary School entered teams in the friendly competition to test out the rowing skills some of their pupils had learned while taking part in Oarsome Chance’s after-school rowing club, based at their Maritime Workshop in Gosport, adjacent to the Jervis Gallery at St Vincent College where yesterday’s event was held.

Each school’s team was made up of a total of ten Year 6 pupils, 5 boys and 5 girls, with each team taking part in three challenges on dry rowing machines – a two-minute distance challenge, a 1000 metre team relay and an exciting 100-metre sprint heat final. The young rowers aged between 10 and 11 pulled out all the stops and impressive times were logged across the board.

Marley Scott, a Year 6 pupil at Haselworth, was awarded the trophies for both the 100-metre sprint (boys) and two-minute challenge (boys). After the prize giving ceremony, ten-year-old Marley said: “It’s brilliant to win both events but it was a really close competition.”

Lily Gillard, a Year 6 pupil at St John’s C of E Primary School, won the trophy for the two-minute challenge (girls) and Shanice Crossley for Oarsome Chance was the fastest in the 100-metre sprint (girls).

The winners received their their prizes from Oarsome Chance Principal John Gillard accompanied by Riley Randle, a Year 7 pupil at Brune Park, who was the rowing champion from Brune Park last year.

“We were really impressed by the effort put in by all the young people. And big thanks to all the schools and staff involved, for helping us make this new event a big success. We want to open up our activities to as many children and young people as possible as there is so little access for rowing and marine activities for them in the area, so we hope this event will make more people aware of what we do,’ John Gillard, Oarsome Chance Principal, said.

Oarsome Chance has been running the weekly rowing club since September this year where young people get the chance to pick up rowing skills, not only on dry rowing machines, but also out on the water in Skiffs – wooden fixed rowing boats designed for sea-rowing and powered by 4-6 people with oars or paddles. Oarsome Chance are hoping this Year 6 school competition will become an annual event and grow year on year.

Haselworth’s Year 6 teacher, Victoria Wright, was at the Row-Off to cheer on her pupils along with Headteacher Emma Steele and Learning Support Assistant Julie Daniels, along with many of the pupils’ families.

“They come to the after-school club every week and it’s been amazing. Out of my class of 19, a total of 14 signed up to come when they were given the opportunity. They’ve learned so much about teamwork, resilience and having a go – they absolutely love it,” Victoria Wright said.

The Oarsome Chance charity runs a school-time programme for young people aged from 9 through to 19 who are disengaged from mainstream education and at risk of exclusion. This programme brings about change in the lives of the students referred to them by local schools and the local authority, by combining rowing and other maritime activities with vocational training (boat building, carpentry, canvas skills and bike maintenance).

To find out more about Oarsome Chance and what they do, please contact