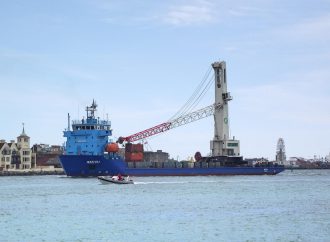 A massive 432-tonne crane has arrived in Portsmouth in a huge boost for the city port’s cargo prospects, according to The Portsmouth News.

International cargo operator, Portico, is now one of a handful of UK ports capable of managing the largest loads following the arrival of the mobile lifting device.

The £3m crane, which was constructed in the Netherlands, is owned by Portsmouth City Council and leased to Portico.

The mega crane is expected to be used by Portico to support global offshore wind giant MHI Vestas in managing some of the world’s largest wind blades when they arrive on bigger vessels.

Cllr Gerald Vernon-Jackson, leader of the city council, says: “This planned purchase was brought forward last year because of changes to customers’ needs. Leasing the asset to Portico is both a smart investment move because it means the council has assets which hold value and also it secures the long-term viability of Portsmouth’s international cargo operator.

“For customers such as MHI Vestas, it demonstrates our commitment as owners of Portico that we’re prepared to make the necessary investments required to future-proof the business.”

The new piece of equipment will open the door for lucrative cargo contracts for Portsmouth, which could help boost the city’s economy, according to The Portsmouth News.

“Our current and prospective customers are moving to larger vessels, so this continued investment means we’re able to manage expectations well into the future,” comments Steve Williams, Portico operations director. “It also positions Portico as one of the few UK ports that can offer tandem crane lifts up to 250 tonnes, a specialised technique which provides great options for a variety of cargo requirements.

“We’re the first UK port to invest in this latest tandem lift system technology from Konecranes. It shows we are prepared to invest, and helps to continue diversifying and provide flexibility for our customers.”