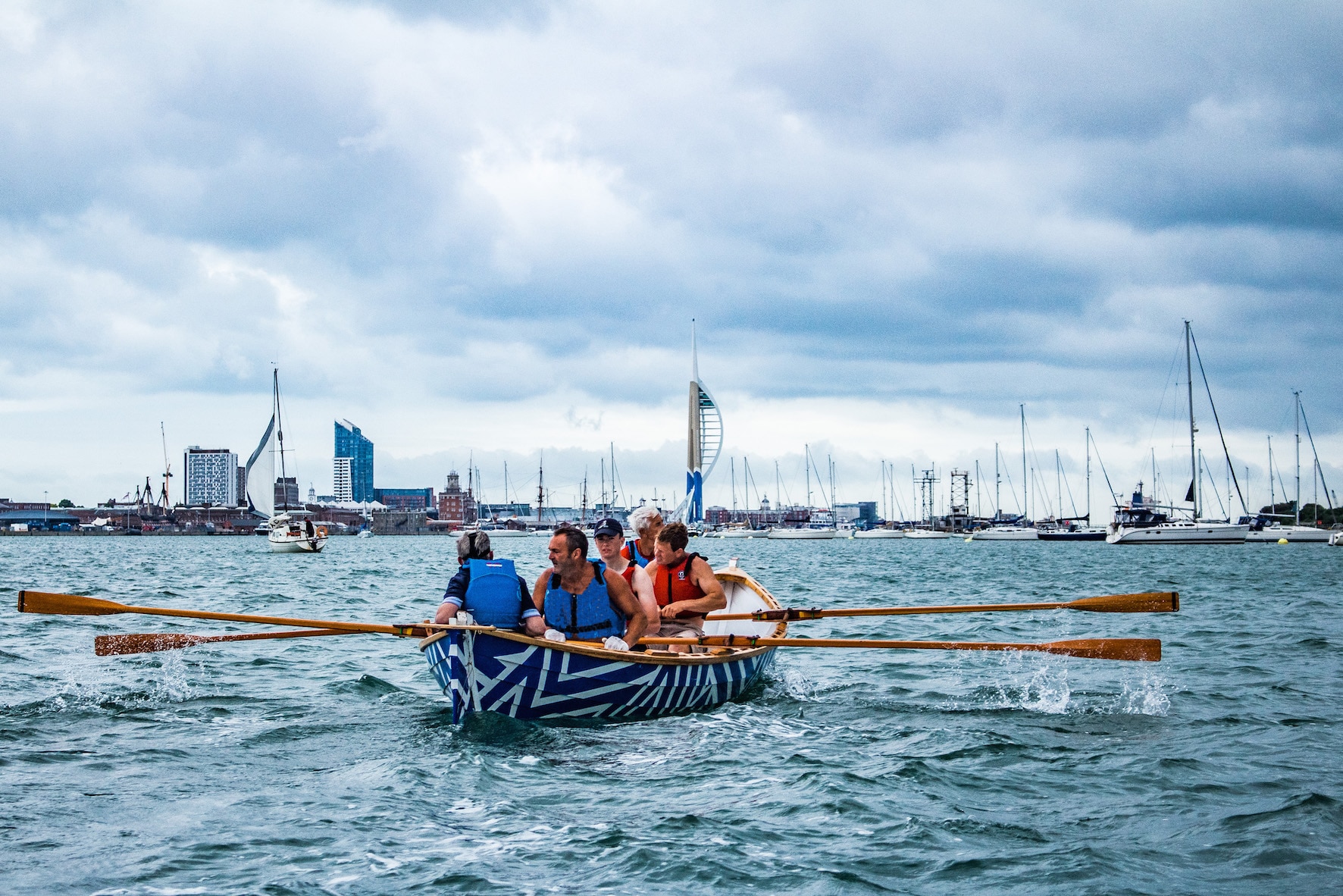 Four teams of fundraisers for the Gosport based youth development charity, Oarsome Chance, enjoyed the ‘row of a lifetime’ around Portsmouth Harbour in the inaugural Portsmouth Pull on Saturday (16 June).

The 10km (5.3 nautical mile) course took the 21 rowers in identical 23-ft rowing skiffs past Portsmouth’s iconic landmarks including the Spinnaker Tower and Nelson’s flagship HMS Victory in the world-famous naval harbour, home to the UK’s largest ever aircraft carrier HMS Queen Elizabeth. The teams headed past the busy continental ferry port towards the medieval Portchester Castle and down past Hardway, before passing back under Gosport’s Millennium Bridge for the finish.

John Gillard, Oarsome Chance Principal, said: “It was an epic battle for each of the teams in challenging conditions, not just against each other, but also against themselves. It was wet and wild, fast and furious, and an amazing adventure especially for those who had never rowed before.”

The five-strong crew of Little Victory lived up to their name by logging the fastest time of 1hr 27mins for the lap of Portsmouth Harbour to claim the handmade wooden trophy. Little Warrior finished second in 1hr 45mins and OC1 finished third in 2hrs 7mins. OC2 retired due to challenging weather conditions, which saw the teams rowing into fresh southwesterly headwinds of up to 20 knots.

“It was the row of a lifetime and we were buzzing when we crossed the finish line. We wanted to do it in under 1h 30m, so we went for a sprint finish, and we did it. It was amazing,” Steve Walker, one of the Little Victory crew, said.

Before presenting the prizes, Oarsome Chance Founder, Paul O’Grady, said: “Today’s first Portsmouth Pull has been a great success, and it’s going to be the first of many to raise essential funds for Oarsome Chance.”

The charity plans to run a series of Portsmouth Pull events annually and the programme of upcoming dates will be announced shortly. “The bar has been set high for the next event, and if the level of interest we’ve received today is anything to go by, the slots are going to fill up fast,” Oarsome Chance Principal, John Gillard, said. To register interest in taking part in the Portsmouth Pull contact: events@oarsomechance.org

Nine of the participants were students at St Vincent College, which is adjacent to the Oarsome Chance base in Gosport. Six of them took part to prepare for a three-day expedition for their Duke of Edinburgh Silver Award, which they will undertake in August to raise funds for Oarsome Chance.

John Woodman, Duke of Edinburgh award coordinator and teacher of uniformed public services at St Vincent College, said: “The Portsmouth Pull was an incredible experience for our students. It was a lap of Portsmouth Harbour, but in fact, it was far more than that. It pushed them out of their comfort zone and they faced challenging conditions but they performed brilliantly – it’s been phenomenal.”

The rowers in the Portsmouth Pull were raising funds for the groundbreaking work the charity is doing with disadvantaged young people from across Hampshire. Working with 9-19 year olds who are disengaged from mainstream education and at risk of exclusion, Oarsome Chance uses a combination of water-based sport, Boat building and vocational training to bring about positive change in young people’s lives.