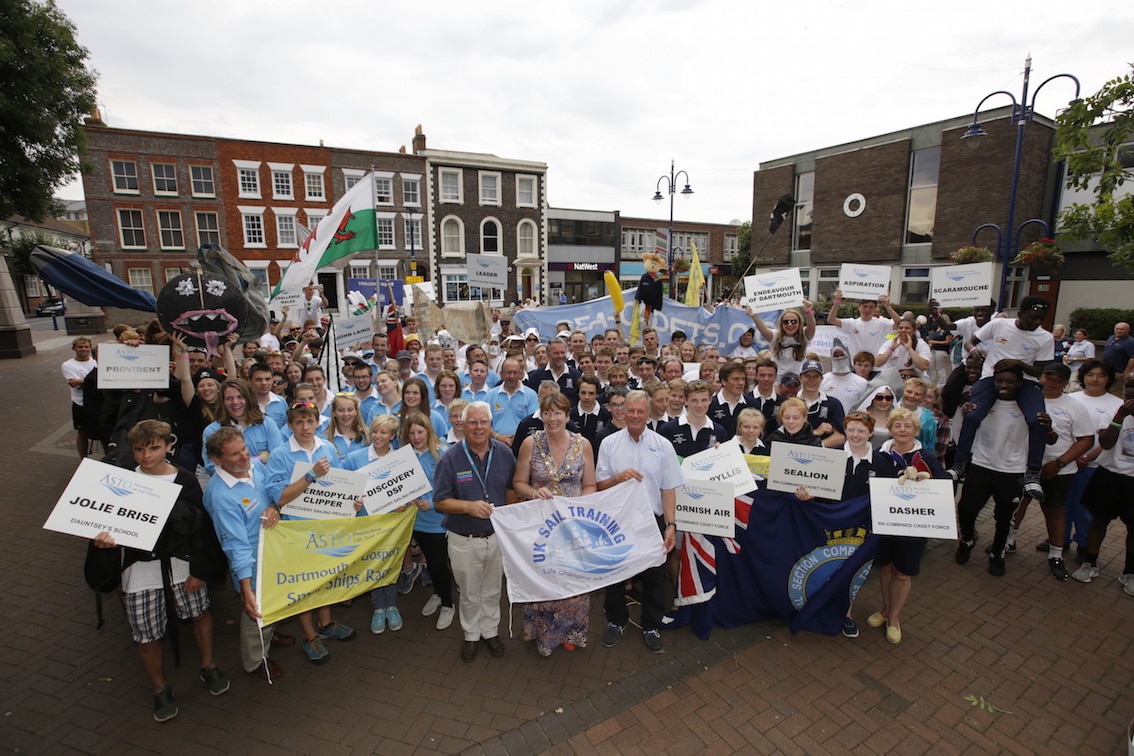 Almost 180 young people from all over the UK were welcomed to Gosport at the end of the ASTO Dartmouth to Gosport Small Ships Race which took place between Monday 22 and Wednesday 24 August.

The 21 teams taking part paraded through Gosport after being welcomed to the coastal town by Gosport Mayor Cllr Lynn Hook, who told the crews it was a “huge achievement” to sail overnight from Dartmouth to Gosport. She said Gosport was “incredibly proud” to host all the young crews who include a group of young carers from Devon funded by the Royal Dart Yacht Club and a team of blind and visually impaired youngsters from the MACS charity.

General Manager of ASTO, Lucy Gross, said: “I am really pleased that the Dartmouth to Gosport race has been such a success. Young people from a wide variety of backgrounds sailing together in such a diverse fleet shows that taking part in adventurous Sail Training is for everyone.”

ASTO Chairman James Stevens: “An offshore sailing race is a huge achievement for these young people, many of whom had never sailed before they joined the yachts in Dartmouth. You could see the mixture of relief and exuberance as the celebrated in Gosport. I am sure they will all remember this experience for the rest of their lives.”

Two very different educational institutions shone in the 160-nautical mile challenge which saw a wide range of vessels competing under a handicap system taking into account the boat’s age, average speed and sails used, which is designed to give each team an equal chance of winning.

The overall winner was Jolie Brise, the gaff-rigged veteran built in 1913 with a strong track record including three Fastnet Race wins, crewed by pupils from Daunstey’s, a leading independent school in Wiltshire.

The boat to take line honours was Scaramouche, crewed by students aged from 14-17 from Greig City Academy, a mixed-sex secondary school in the London borough of Haringey. The GCA Sailing project was set up by Geography teacher Jon Holt and the crew started racing at the end of last year after obtaining Scaramouche in a state of “total disrepair” from a field in Kent last year. The pupils worked on the boat to get her back in the water and since then have competed in a range of regattas including the Round the Island Race and Cowes Week. The team were also awarded the Richard Langhorn Trophy after being voted for by the other crews as “the team that best represented the spirit of the race”.

“To get line honours is great but to be voted for by the other crews to get the Richard Langhorn Trophy is even more special. We’re very new to this [Sail Training] community and it feels like we are being welcomed into the ASTO family. It’s a really big thing for us to know that people understand what we are doing,” Jon Holt said.

Over the last year the students have given 54 talks about the project to gain support and sponsorship including at Buckingham Palace after being invited by a member of the Royal Family following a presentation at the Royal Yacht Squadron. Yesterday was no exception with two of the students on the GCA Sailing Team making a flying visit to London to deliver a talk between finishing the race and attending the prize giving ceremony at Hornet Services Sailing Club in Gosport.

The young people on 21 boats set sail from Dartmouth in ideal conditions on Monday afternoon with a fresh breeze of 15 knots blowing from the WSW and bright sunshine after a spectacular Parade of Sail down the River Dart.

The young people from a wide range of backgrounds sailed under the banner of the Gosport-based Association of Sail Training Organisations (ASTO), the UK’s Sail Training umbrella organisation.

Amongst the young people taking part was Jack Britton, a 17-year-old who has autism from Gosport. “It was amazing and I can’t wait to get out and do some more sailing,” he said. Jack and the team on board Discovery Sailing Project’s 60-ft yacht finished the race at 0430 on Wednesday morning off the Isle of Wight after battling against the tide and light winds through the night.

Jack is one of six young people taking part in Gosport Marine Scene’s Marine Futures programme, a six-month course to introduce young people who would not otherwise have the opportunity to sailing and careers in the marine industry.

Jack’s mum, Tina Betts, was at the Town Hall to welcome her son home. Tina, who is also autistic, said: “I’m so proud of him. He’s absolutely amazing. I’ve never seen him so happy and it brings tears to my eyes,” she said.

“I’m also autistic like Jack and people often reject us for having a disability so it’s amazing to have all this support. Jack is so lucky because we didn’t have these sorts of opportunities in my day. It’s been absolutely amazing to see Jack train, to learn new skills and social skills. It’s the first time he’s ever been away overnight and I really missed him, “ she said.

Also on the Marine Futures programme is 14-year-old Megan Eddles, who said she got very little sleep during the race over two nights. “We had the tide against us at the end and hardly any wind so we got to see the Isle of Wight and the lighthouse [at St Catherines] from every imaginable angle,” she said.

“I was very fortunate to get a place and before taking part I didn’t know anything about sailing. I’ve started doing my RYA training on the boat and I think a career in the industry might be on the cards,” she added.

The winners of Class C were the team of visually impaired and blind young people from the MACS charity racing on the Ocean Youth Trust South’s John Laing (OYT South is also based in Gosport) and Class D was won by the team of young cadets on Sealion operated by the RN Combined Cadet Force based in Plymouth.

Almost all of the 21 Sail Training vessels that took part are ASTO members. At least half of the crew on board each vessel is under 25 with the youngest sailors being just 13 years old. The majority of the young people taking part had never sailed before and experienced the life-changing potential of Sail Training for the first time.

ASTO, the Association of Sail Training Organisations, is a registered charity with a membership made up of more than 30 not-for-profit bodies that operate more than 50 vessels around the UK. ASTO members offer year round Sail Training opportunities all over the UK, around Europe and also further afield in locations such as the Canaries and the Caribbean.

For further information about ASTO, its member organisations and opportunities for young people from all backgrounds to get involved see www.asto.org.uk.